ABC transporters are fascinating molecular machines that use the energy of ATP hydrolysis to drive the movement of substrates across the lipid membranes. They are ubiquitous transporters involved in the import of essential molecules in prokaryotes and the efflux of cytotoxic molecules in humans.These ubiquitous transporters have been implicated in multidrug resistance, a key clinical obstacle in the treatment of cancer, epilepsy, malaria, and many other parasitic, bacterial and fungal infections. In humans, 48 such molecular machines mediate a spectrum of functions including cholesterol transport , immunity and resistance to chemotherapy to name a few. In human tumor cells, the ABC exporter, P-glycoprotein (Pgp or ABCB1) acts as an ATP-dependent multidrug efflux pump conferring resistance to anticancer drugs, as well as to a variety of other compounds. In humans, Pgp also plays direct roles in the absorption, distribution, and excretion of pharmaceuticals, thus determining their effectiveness and toxicity.


We have developed mechanistic models of multiple ABC transporters including the mammalian multidrug transporter Pgp.  Below is an example from our recent paper in Nature(2017). 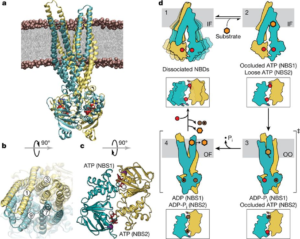 Hassane’s interview for the EPR newsletter