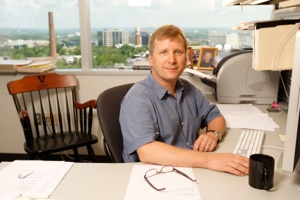 Gary A. Sulikowski received a BS in chemistry from Wayne State University and a PhD in organic chemistry from the University of Pennsylvania. He was an American Cancer Society postdoctoral fellow at Yale University. His first faculty appointment was in the Department of Chemistry at Texas A&M University in 1991, where he was promoted to full professor in 2001. He joined the Vanderbilt Chemistry Department as Professor of Chemistry and member of the Vanderbilt Institute of Chemical Biology in the 2004-2005 academic year.

Dr. Sulikowski has received a number of fellowships and awards including an American Cancer Society Junior Faculty Fellowship, an Alfred P. Sloan Fellowship, an Association of Former Students of Texas A&M Teaching Award, an American Cyanamid Award and an Eli Lilly Research Award. He was named a Texas A & M Faculty Fellow from 2002-2007, AAAS Fellow 2008 and a Robert A. Welch Lecturer in 2004, and he was awarded a Japan Society for the Promotion of Science Fellowship in 2003.