The Molecular Biology of Olfactory Signal Transduction in Mosquitoes 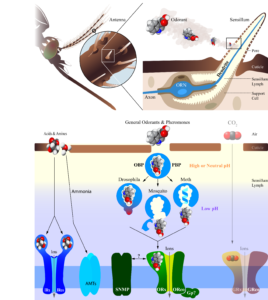 The proteins that are graphically represented here are present on the inside surface of the olfactory receptor neuron (ORN) dendritic membrane on olfactory receptor neurons. Signal transduction is initiated when odorants (either alone or in complexes with Odorant Binding Proteins) bind to members of seven transmembrane containing odorant receptors (ORs). Originally thought to be G-protein coupled, insect ORs are now almost universally recognized to be novel signaling complexes that combine ligand specificity subunit (conventional ORs) with a widely- expressed, non-conventional OR subunit that most probably acts as a direct ionotropic channel on ORN dendrites- this OR used known by many different names depending on the system it was found in (e.g. in mosquitoes this common component was called OR7) and now is universally known as ORco which is short for OR co-expressed.

In addition to ORs,  studies in Drosophila and mosquitoes  have also pointed to the existence of another class of chemosensory receptors known as ionotropic receptors (IRs) that have homology to insect glutamate receptors.  Current efforts are focused on understanding how ORs, IRs,, Gustatory Receptors (GRs, active in volatile CO2 responses), ion channels/transporters and other components of this pathway mediate olfactory signal transduction in anopheline mosquitoes.