The Macara laboratory is fascinated by epithelia, which were the first tissue type to evolve with the rise of multicellular animals, and which form all of the organs that contact the external world – skin, intestine, exocrine glands, lungs, kidneys, etc.

Remarkably, embryonic stem cells and pluripotent stem cells (ESCs and iPSCs) are epithelial.   In many organs, epithelia are maintained by adult stem cells.

Strikingly, over 90% of human cancers arise from epithelia.

Epithelial cells are characterized by apical-basal polarity, and by intercellular junctions.

Epithelia exhibit collective decision making.  They talk to each other to decide whether to divide, or migrate, or extrude from the tissue.

We are interested in how epithelia maintain homeostasis and how this is lost in cancer; how epithelial stem cells respond to damage; how cell lineage is maintained and altered; and how epithelia achieve and maintain cell polarization. We are also very interested in why ESCs and iPSCs are epithelial, and how these cells lose their epithelial nature when they lturn into mesoderm and cardiomyocytes.  We use multiple mouse models, in vivo fluorescence imaging, CRISPR screens, single molecule imaging, and organoid cultures to investigate these problems. 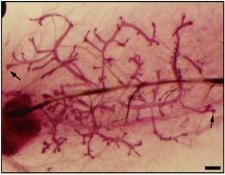 EPITHELIAL STEM CELLS AND THEIR RESPONSE TO DAMAGE

A fundamental biological question is how epithelia maintain integrity in the face of continual stresses and damage.  Lindsey Seldin, a senior postdoc in the lab, asked how the skin and mammary gland respond to DNA damage.  She discovered a remarkable series of events occurs when these tissues, in the mouse, are exposed to DNA cross-linking agents.  The basal cells (which form the intra-epidermal stem cells in skin) begin to rapidly proliferate and their progeny undergo lineage mis-specification.  In mammary glands the basal cells transdifferentiate into luminal epithelial cells.  Lindsey discovered that the effects she was seeing wer e non-cell autonomous, which means they were indirectly caused by other cells in the tissue.  In the skin, dermal fibroblasts respond to DNA damage by activating a part of the innate immune system called the NLRP3 inflammasome.  This triggers release of the cytokine IL1-bata, which turns on cell proliferation and lineage mis-specification in the basal stem cells.  This work was published in Developmental Cell (2020), was highlighted on the cover, and was discussed in an accomanying Preview article.

Armelle Le Guelte, a former postdoc, found that killing mammary epithelial cells using diphtheria toxin can also cause lineage switching by neighboring cap cells, which function as basal cell progenitors.  This work is currently under review.  Erica Tross, a grad student, is also studying the plasticity of mammary gland lineages and has discovered that mature myoepithelial cells can revert to a cap cell identity and then transdifferentiate into luminal cells.  Using RNAseq, scRNAseq and cell tracking, she found that a transcription factor called RFX3 plays a key role in this process.

Maria Fomicheva, a student who defended her PhD dissertation last year, performed a clever genome-wide CRISPR knockout screen to identify genes that tell epithelial cells when to stop dividing.  When epithelia reach a certain density they make a collective decision to stop.  In her screen, Marija used a cool fluorescent cell cycle marker, FUCCI, to identify cells that continue to grow when their neighbors have all stopped cycling.    ePH4-Fucci001-timescale-

She identified a gene called TRAF3 that normally suppresses cell proliferation at high density, but when deleted the epithelial cells continue to cycle uncontrollably.  TRAF3 plays a key role in the non-canonical NFkB  pathway, which is activated byinnate immune signaling.  Maria’s study was published in 2020 in eLife.  It was discussed by the AZO Network and in the Oncology Times.

A common idea, widely discussed in the literature, is that an early event in the initiation of cancers is loss of oriented mitosis.  Normally, epithelial cells divide in the plane of the cell sheet so the sheet expands in size but does not become highly multi-layered (except for stratified epithelia).  Alex Pfannenstein has investigated this idea by generating CRISPR-edited cell lines in which the spindle orientation mechanism is defective.  Remarkably, he finds that rather than creating multiple layers, the daughter cells in these lines re-integrate back into the epithelial layer to maintain their normal organization.  He also found that, using PTEN knockout and Polyoma middle T expression as breast cancer models, luminal filling of the mammary glands occurs but their is no spindle misorientation.  He also developed a new assay to observe re-integration of cells into the epithelium and is using it to investigate the molecular mechanism. Paola Molina, a new postdoc in the lab, is investigating the mechanisms by which cancer cells get extruded from epithelial monolayers, using CRISPR screens, live cell imaging and other approaches.

Mukhtar, a research assistant professor in the laboratory, discovered a couple of years ago that the PAR3 polarity protein functions at epithelial tight junctions as a receptor for the Exocyst, an octameric complex that tethers vesicles at the plasma membrane to promote fusion (Nat Commun 2017).  Exocyst is essential for the delivery of membrane proteins and secreted proteins.  Despite decades of research, very little is yet understood about how the exocyst works.  To overcome artifacts and problems associated with over-expression, we used CRISPR/Cas9 editing to create epithelial cells that express fluorophore-tagged alleles of multiple exocyst subunits.  Coupled with high speed, ultrasensitive TIRF and near-TIRF multi-channel microscopy, we can detect single exocyst molecules and track their movements, assembly and disassembly, in real time within living cells (Nat Commun 2018).

In collaboration with geneticists in Australia, we have demonstrated vesicle fusion defects in cells from a human patient with a mutation in one of the exocyst subunits. Interestingly, the exocyst complex still retains partial function, which explains the fact that the patient is alive (J Exp Med 2020).  This mutation provides a powerful tool for further analysis of exocyst mechanism.  We are creating mouse models of the mutation, and have a CRISPR knock-in mouse with a GFP-tagged exocyst subunit so that, for the first time, we can image endogenous exocyst in primary cells and tissues.

The Crumbs polarity proteins are apical transmembrane proteins that maintain cell polarity and interact with the Hippo pathway to control cell proliferation.  How Crumbs reaches the apical surface, and how/when it interacts with other components of the polarity machinery, remains a mystery.  Christian de Caestecker has developed knock-in CRISPR cell lines in which Crumbs is tagged with a fluorophore so we can detect single molecules in living cells.  He has also created a so-called RUSH system in which Crumbs is trapped and accumulates in the endoplasmic reticulum until it is released by the addition of biotin.  It then transits synchronously through the Golgi to the apical plasma membrane.  The ability to track molecules at each step of this process will lead to new insights into the polarized traffic of this key protein to the apical cell cortex.

Human iPS cells and ES cells are epithelial, with robust apical/basal polarity.  Interestingly, this epithelial character is essential for pluripotency.  Loic Fort, a postdoc in the lab, has found that an abrupt transition to a mesenchymal state (EMT) occurs during the conversion of these cells to cardiomyocytes.  We are interested in understanding how and why this transition occurs.  We are using RNAseq, CRISPR-mediated gene editing and live cell multicolor imaging to determine the underlying molecular mechanism that drives this transition. To our surprise, he discovered that widespread apoptosis occurs shortly after activating the WNT pathway, which is the first step towards mesoderm lineage specification.  Through a series of clever experiments, Loic found that “find-me” signals released by the apoptosing cells, are essential to permit their surviving neighbors to respond to WNT and begin the transition towards mesoderm.  This is a completely novel function for these signals, which normally attract macrophages to engulf the dying cells.