Assembly of the division apparatus

Eukaryotic cells accomplish cell division with exquisite spatial and temporal control. A key event of cytokinesis is the reorganization of the actin cytoskeleton into a contractile ring (CR). CR formation and most of the proteins contributing to this complex structure are conserved from yeast to humans, making the fission yeast S. pombe a powerful model organism for studying cytokinesis. Additionally, we employ a powerful combination of experimental techniques including sophisticated super-resolution imaging, biochemical reconstitution, mass spectrometry, and genetics to understand this phenomenon.

Our research into the CR apparatus centers on 4 broad categories. Click on the links to jump ahead to each category. Also check out our recent review on contractile ring function (Mangione et al., 2019).

I.    Formin Cdc12, the formin necessary for assembling the CR actin

II.   F-BAR proteins, part of the glue that links the CR actin to the plasma membrane

IV.  The role of phosphoinositides in anchoring the CR to the plasma membrane

We are keenly interested in understanding how the essential formin Cdc12 is
recruited to and regulated at the cell division site. Indeed, a key step in CR formation is getting the essential formin Cdc12 to the division site, where it nucleates, elongates and bundles F-actin to make the CR. Cdc12 is recruited to the division site in part through an interaction with the F-BAR domain of the scaffold Cdc15 (Carnahan and Gould, 2003; Willet at al.,2015). However, this is not the sole mechanism and we are studying other linkages that contribute to its proper recruitment and activity. Also, division site localization is not sufficient for F-actin nucleation indicating additional mechanisms regulate Cdc12 activity at the CR. We discovered that the formin is controlled in part through an oligomeric switch mediated by phosphorylation (Bohnert et al., 2013). We are now using TIRF and biochemical tests with purified components to determine how the oligomerization domain (called the C’ domain) influences F-actin assembly by Cdc12.

Uniting characteristics of the F-BAR protein family are the presence of a membrane-binding F- BAR domain and a role in linking membranes to the F-actin cytoskeleton. Like many F-BAR domains, Cdc15’s F-BAR domain binds the membrane and oligomerizes. Membrane binding and oligomerization are essential for the stable association of the CR at the cell equator as mutations that abolish membrane binding or oligomerization cause CR sliding during constriction. F-BAR oligomerization is also critical for physiological function of human F-BAR proteins Fer and RhoGAP4, demonstrating its broad importance to F-BAR proteins (McDonald et al., 2015).
Unexpectedly, we discovered that Cdc15, Fer, and RhoGAP4 plus 4 additional human F-BAR proteins do not bend or tubulate membranes. Even more remarkably, studies with Imp2, a Cdc15 paralogue, revealed that although it tubulates membranes in vivo, this activity is dispensable for its cellular function (McDonald et al., 2016). These studies identified a sub-group of F-BAR proteins without membrane tubulation activity and provided strong evidence in support of the hypothesis that membrane binding and oligomerization—not tubulation activity—are the vital properties of F-BAR proteins in vivo (McDonald et al., 2016).
Predictably, Cdc15 functions are carefully regulated. Like Cdc12, Cdc15 is regulated by phosphorylation. Upon entry into mitosis, Cdc15 dephosphorylation triggers a conformational change that results in its oligomerization and allows interaction with binding partners. Using mass spectrometry, a large number of phosphorylation sites were identified (>30) and mutation of these sites to non-phosphorylatable residues resulted in precocious Cdc15 oligomerization and the formation of pre-ring assemblies of cytokinetic proteins. This in turn led to defects in CR construction, constriction, and disassembly (Roberts-Galbraith et al., 2010).
We have now found that the Pom1 is one of the kinases that directly phosphorylates Cdc15 on 22 sites. Pom1 is a DYRK kinase that is tip localized to inhibit CR formation at cell tips partly through the direct phosphorylation of Cdc15. By phosphorylating Cdc15, Pom1 inhibits Cdc15’s membrane-binding activity as well as its ability to bind Pxl1 at cells tips. However, Pom1 phosphorylation of Cdc15 does not regulate the ability of Cdc15 and Fic1 to interact. In either wildtype or mid1∆ cells, we propose that Cdc15 can bind membrane and Pxl1 to stabilize the CR only where Pom1 is not active (see figure below) (Bhattacharjee, Mangione, et al., 2019). 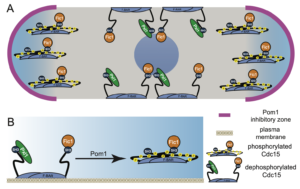 A) Model of Pom1 inhibition of Cdc15 membrane binding at cell tips in a single interphase cell with the nucleus in the middle.

B) Molecular model of Pom1 inhibition of Cdc15 membrane binding.

We are currently identifying additional protein kinases and phosphatases that contribute to Cdc15 phosphoregulation and determining how they affect the ability of the F-BAR domain to oligomerize and bind membranes and protein partners. We are also using mathematical modeling to understand whether different signaling inputs have different outputs in terms of cytokinesis control via Cdc15 scaffolding function.

We are interested in using the fission yeast CR as an example of how the division site is organized in a eukaryotic cell. As described, we’ve discovered that Cdc15 forms a multivalent scaffold on the plasma membrane while simultaneously interacting with numerous proteins through both its N-terminal F-BAR domain and C-terminal SH3 domain. However, we do not know how all of these proteins are spatially organized relative to the membrane, CR actin, and each other. To obtain an interaction map of cytokinetic ring components, we employed a combination of super-resolution fPALM microscopy and intermolecular FRET and found that the fully formed and unconstructed CR is stratified into three layers; a membrane proximal layer, an intermediate layer and a distal layer. The membrane proximal layer consists of membrane scaffolds such as the F-BAR Cdc15 and anillin-like Mid1. The intermediate layer consists of many signaling proteins while the distal layer contains F-actin and actin binding proteins (McDonald et al, 2017). We are interested in better understanding how proteins may rearrange upon constriction of the contractile ring to understand how this process is initiated and completed. 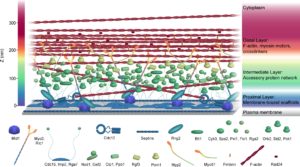 Figure from McDonald et al, 2017. Available at https://elifesciences.org/articles/28865 under the terms of the Creative Commons Attribution License.

Another way we are discovering how components of the CR are spatially organized is by reconstituting the cytokinetic machinery in vitro on synthetic membranes that allow imaging of labeled components by total internal reflection fluorescence (TIRF) microscopy. This system allows us to ask if/how proximity to membranes influences the molecular activity of major CR components. The results of this work will provide further information about the organization of molecules at the division site and how spatial arrangement might restrict or promote individual molecular functions.

The CR is assembled at the plasma membrane, which is composed of a phospholipid bilayer interspersed with proteins and cholesterol. The fission yeast gene efr3 encodes a component of the plasma membrane phosphoinositide (PI) 4-kinase complex that produces PI4P. Deletion of efr3 (efr3∆) results in cytokinetic defects (Chen et al., 2015). Our recent studies revealed that plasma membrane phosphoinositide lipid composition is altered in efr3∆ and this results in CR anchoring defects (Snider et al., 2017). In other words, CRs slide from the cell center in efr3∆ cells. Following up on this work we found that a mutation in the PI-5-kinase Its3 also has CR anchoring defects, implicating PI(4,5)P2 levels in maintaining at stable medially anchored contractile ring (Snider et al., 2018). We are taking advantage of these strains to determine the role of phosphoinositides in cytokinesis and to identify the full range of mechanisms and proteins that anchor the CR to the plasma membrane.