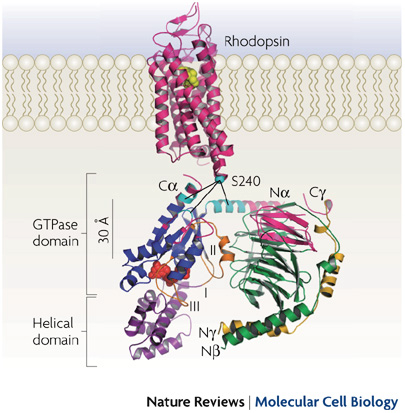 My work is focused on understanding the molecular basis of signaling mechanisms mediated by G proteins, which are switch proteins. G proteins are normally inactive, but a receptor that has received a specific signal can activate G proteins, leading to changes in the activity of enzymes that produce second messengers such as cyclic AMP and calcium. The resulting changes in cellular activity underlie a large number of physiological processes. G protein-mediated signalling cascades are key regulators of many physiological processes, including processes of development, differentiation, and regulation of cell division. In the brain, many key neurotransmitters and neuromodulators mediate a myriad of functions by activation of such G protein cascades. The research in my laboratory is aimed at understanding how G proteins become activated by receptors, how they in turn activate effector enzymes, and how they turn off. We determined the sites of interaction between proteins using a method of decomposing the proteins into small synthetic peptides and determining which peptides blocked interaction sites (Hamm et al., 1988; Rarick et al., 1992; Artemyev et al., 1993; Arshavsky et al., 1994). To understand the process more fully, we determined the atomic structure of the proteins in collaboration with the group of Paul Sigler. We used X-ray crystallography to solve the three-dimensional structures of G proteins in their inactive (GDP bound), (Lambright et al., 1994) and activated (GTPγS-bound) forms (Noel et al., 1993). We caught a glimpse of the self-inactivating process in another crystal form, the transition state analog, Gα.GDP.AlF4- (Sondek et al., 1994). Soon after, the structures of the βγ subunit (Sondek et al., 1996) and the heterotrimeric G protein (Lambright et al., 1996) were solved. These high-resolution structural studies allowed us to postulate specific hypotheses regarding mechanisms of receptor:G protein interaction and activation, G protein subunit association-dissociation and effector activation.

There are a number of projects ongoing in the laboratory; rotation projects as well as postdoc positions are available in several areas:

We are investigating the molecular basis for interactions of Gαβγ subunits as well as βγ interaction with downstream effectors.  It is known that a number of signaling pathways are regulated by free βγ subunits, which are liberated by the GTP-dependent dissociation from the α subunit. Some of these are K+ and Ca2+ channels, phospholipase Cβ, PI-3-kinase, certain isoforms of adenylyl cyclase, βARK, and MAP kinase cascades. Site-directed Ala scanning mutagenesis was used to characterize the molecular basis of these interactions (Ford et al., Sci 280, 1271, 1998).  In addition to these, there are possibly other effectors of Gβγ subunits, and we are seeking to discover novel effectors using yeast two-hybrid techniques.  We have recently shown that Gβγ subunits interact with SNARE proteins which make up the fusion machinery for exocytosis, a novel Gβγ effector  (Blackmer et al., Nature Neurosci  8, 421, 2005; Yoon et al., Mol Pharmacol, 72, 1210, 2007).

One of the most important roles of Gβγ subunits in the brain is to monitor and control the amount of neurotransmitter release at synapses by Gi/o-coupled inhibitory neurotransmitter receptors. They do this through a dual regulation of the amount of Ca2+ coming in through voltage gated Ca2+ channels (Ford et al., Sci 280, 1271, 1998), and direct inhibition of synaptotagmin binding to SNARE proteins, the exocytotic fusion apparatus (Blackmer et al., Sci, 292, 293, 2001; Blackmer et al., Nature Neurosci  8, 421, 2005; Gerashchenko et al., Nature Neurosci., 8, 597, 2005) . Synaptotagmin is the Ca2+ sensor that triggers SNARE assembly and exocytosis.  Gβγ directly competes with synaptotagmin binding to SNAP25 and syntaxin, two of the SNARE proteins (Yoon et al., Mol Pharmacol, 72, 1210, 2007).  This results in an inhibition of vesicular fusion, as well as a change in vesicle fusion mode to “kiss-and-run” (Photowala et al., Proc Natl Acad Sci USA, 103, 4281, 2006).  We believe that this is one of the regulatory mechanisms the neural and endocrine systems use to modulate hormone and neurotransmitter release; in the brain, this is a key mechanism for modulating neural circuitry in information processing.   We are interested in this mechanistically, and we have worked out the details of how these proteins interact (Wells et al., Mol Pharmacol. 82,1136, 2012;  Zurawski et al., Mol Pharmacol.89, 75, 2016).  Gβγ inhibits vesicular fusion even in a completely reconstituted system (Zurawski et al., 2017 J Biol Chem. 292, 12165).

Recently, we showed that removal of the C-terminal 3 amino acids from SNAP25 decreases Gβγ-SNARE interaction (Zurawski et al., Mol Pharmacol.  89, 75, 2016), and based on this finding, we have generated CRISPR mice with a premature stop codon.  Mice defective in Gβγ-SNARE interaction allow us to examine the in vivo importance of this mechanism downstream of calcium entry.  The mutant mice exhibit a number of electrophysiological and behavioral deficiencies, highlighting this interaction as a critical regulatory mechanism for hormone or neurotransmitter release phenotypes (Zurawski et al., bioArxiv, 2018 http://dx.doi.org/10.1101/280347 ).  Importantly, this mouse model shows that the two main inhibitory presynaptic mechanisms (Gbg modulation of calcium entry, and Gbg inhibition of exocytosis through direct interaction with the SNARE complex) are distinct and separately addressable in vivo.  Most interestingly, these two mechanisms are synergistic with each other, a completely unexpected result.   This observation raises the possibility that therapeutic pairing of drugs that affect each mechanism may themselves work synergistically, an exciting possibility.

Also, we are preparing small molecule inhibitors and enhancers of the Gβγ-SNARE interaction to have an acute test of the importance of this regulatory step in synaptic physiology.

In the cardiovascular system, many key neurotransmitters and hormones mediate a myriad of functions by activation of such G protein cascades. Thrombin is the major protease in the coagulation cascade whose pleiotropic actions can ultimately lead to thrombosis and tissue injury. Cellular actions of thrombin are elicited through activation of a family of Protease-Activated Receptors (PARs) which are coupled to heterotrimeric G proteins. PARs are unique among GPCRs in that they are activated by thrombin through proteolytic generation of a tethered ligand The ability of the tethered ligand to initiate transmembrane signaling through intramolecular binding has hampered the generation of potent antagonists to these receptors; partly because thrombin’s proteolytic cleavage of PAR is irreversible and the tethered ligand cannot diffuse away from the receptor. We are studying the signaling cascades invoked through PARs in platelets and endothelial cells.   Thrombin works by activation of the G protein-coupled protease activated receptors PAR1 and PAR4 on human platelets to initiate signaling cascades leading to increases in [Ca2+i], secretion of autocrine activators, trafficking of adhesion molecules to the plasma membrane, “inside-out” integrin activation and shape change, which all promote platelet aggregation. We have uncovered a number of differences in signaling properties of PAR1 and PAR4 receptors in platelets, and are studying the molecular basis for these differences (Holinstat et al., J Biol Chem. 281,26665, 2006; Mol Pharmacol. 71,686, 2007; Mol Pharmacol. 76,301, 2009; Voss et al., Mol Pharmacol. 71,1399, 2007; Duvernay et al., Biochem. 15, 5578, 2015).  In addition, we are studying the synergistic actions of thrombin and collagen receptors in platelet activation (Marjoram et al., J Biol Chem. 284,34640, 2009).

These studies are carried out in platelets from normal individuals, as well as in thrombotic states leading to pathological stable angina as well as unstable angina, in patients who are undergoing angioplasty (Holinstat et al., J. Thromb. Thrombolysis 35, 209, 2013).  In addition, we are studying platelets from diabetics to try and understand the reasons why patients with diabetes, insulin resistance and obesity have an increased tendency to form clots that cause heart attacks and strokes.  We have documented resistance to inhibition of clinically relevant targets among diabetics and alarming differences in G-protein coupled responses depending on race (Cleator et al., J Pharmacol Exp Ther  351, 33, 2014).  The long term goal is to understand how aberrent signaling downstream of PARs contribute to the progression of cardiovascular disease.

More recently we have begun to consider PARs from a pharmacological perspective.   The thrombin receptors work in a progressive manner, with PAR1 activated at low thrombin concentrations, and PAR4 recruited at higher thrombin concentrations implying distinct roles for the two receptors in thrombosis and hemostasis.  Indeed, a complete pharmacological profiling of PARs on platelets revealed superior efficacy downstream of PAR4 in comparison to PAR1 (Duvernay et al., Mol Pharmacol 83, 781, 2013).  PAR4 being engaged after PAR1 and displaying superior efficacy suggest it may be a better pharmacological target that may reduce the thrombotic burden while leaving hemostasis intact.  However, the lack of an efficient PAR4 antagonist has prevented an accurate assessment of PAR4’s role, therefore we initiated efforts to target PAR4 with a small molecule.  Efficacious scaffolds have been identified (Young et al., PLoS One 8, e65528, 2013; Wen et al., Bioorg Med Chem Lett. 24, 4708, 2014),  and current efforts are focused on improving pharmacokinetic profiles and potency (Temple et al., J Med Chem 59, 7690, 2016; Temple et al., Bioorg Med Chem Lett, 26, 5481, 2016).  We currently have a tool compound that can be used to probe the role of PAR4 in physiologically relevant contexts (Duvernay et al., Mol Pharmacol, 91, 39, 2017).

These studies will provide deeper insight into the G protein pathways used by PARs. They will elucidate the contribution of PAR receptors to normal platelet function as well as the abnormal platelet activation in thrombotic states. The long term goal is to understand the implications for PAR receptors as therapeutic targets for anti-platelet therapies that may carry less bleeding risk

How does a G protein-coupled receptor interact with the heterotrimeric G protein? What are the contact sites, and how does it work at a distance to catalyze GTP/GDP exchange? What is the path through the molecule that ultimately causes GDP release? Dynamic measures of the conformational changes underlying signaling require a number of solution biophysical methods, such as fluorescence and electron paramagnetic resonance.  We are using the approach of engineering in Cys residues into Cys-less mutant G proteins that can then be targeted with fluorescent groups or nitroxides (Yang et al., JBC, 274, 2379, 1999). Such engineered G protein molecules can be monitored constantly as they undergo conformational changes during the activation and inactivation process. Injection of fluorescently labeled G protein subunits into cells allows trafficking to specific sites, and dynamic changes in their localization. Double Cys mutants can be used in fluorescence resonance energy transfer as well as electron paramagnetic resonance experiments to provide information about changes in intra- or inter-molecular distances during signaling, and cross-linking studies can assess the relevance of the conformational changes for the signaling process. Upon GTP binding to the G protein α subunit, what drives dissociation from the receptor?  These studies have been published in a number of papers, notably in Medkova et al., Biochem. 41, 9962, 2002; Preininger et al., Biochem. 42, 7931, 2003; Oldham et al., Nat Struct Mol Biol 13, 772, 2006; Oldham et al., Proc Natl Acad Sci USA 104, 7927, 2007;  Van Eps et al., Proc Natl Acad Sci USA 103, 16194, 2007; Preininger et al., Biochem., 47, 10281, 2008; Preininger et al., Biochem., 48, 2630, 2009, Van Eps et al., Proc Natl Acad Sci USA 108,9420,2011; Alexander et al., Nat Struct Mol Biol. 21,56 2013; Kaya et al., J Biol Chem. 289,24475, 2014; Kaya et al., J. Biol. Chem. 2016; reviewed in Oldham and Hamm, Nat Rev Mol Cell Biol, 9, 60, 2008.

The combined structural, functional and systems information will contribute to our understanding of basic mechanisms of cellular activation by a variety of signals, and will also provide insight into diseases that affect G protein-mediated function.