Cancer metastasis–the spread of cancer cells to distant organs–is what kills the majority of cancer patients.  In order for cells to metastasize, they must acquire an invasive and motile phenotype, degrading and moving through tissue barriers.  In addition, they must be able to survive and grow at distant sites in the body.

The Weaver laboratory studies all aspects of this process, focusing particularly on how deregulated signaling in cancer cells drives the invasive and metastatic phenotype.  Specific areas are:

The “invasive phenotype” is characterized by the formation of specific actin-based subcellular structures, including lamellipodial leading edge protrusions that drive forward cell movement and invadopodia (Fig 1) that serve as hotspots for secretion of matrix-degrading proteinases and drive proteinase-dependent invasion.  These subcellular structures depend on dynamic reorganization of the actin cytoskeleton and are driven in poorly understood ways by signaling and vesicular trafficking.  Our goal is to understand what drives this process in both normal and cancer cells.  We are using both computational network analyses (Fig 2), statistical analyses of human tumor molecular data, and traditional cell biological approaches to answer this question.  Relevant recent publications are:

Secretion of proteinases, extracellular matrix, and other factors is important during cancer and drives such critical tumor processes, such as invasion, blood vessel formation, and recruitment of stromal cells.  Our recent data suggest that specialized secretion is an integral component of cell motility and invasive processes.  Interestingly, we recently found that invadopodia are specific docking and secretion sites for exosomes.  Exosomes are late endosome-derived extracellular vesicles that are now known to promote various aspects of tumor progression, including angiogenesis and creation of pre-metastatic niches.  These data suggest that creation of invadopodia not only promotes proteolysis of the extracellular matrix but also facilitates multiple aspects of tumor progression by enhancing secretion of exosomes.  We are currently following up on these findings to understand both how these docking sites are created and the impact for various cellular and tumor phenotypes.

Exosomes carry not only protein but also RNA cargoes, including miRNAs.  Delivery of RNAs in exosomes has the potential to alter gene expression in the tumor microenvironment and even induce transformation; however more characterization needs to be performed to define which RNAs are enriched in exosomes and whether they are functional.  A key to understanding this process is identification of RNA scaffolding and trafficking routes in the cell, as how they are regulated by cancer cell signaling.  Our project focuses on the cell biology that underpins the deregulation of this process in colon cancer.  This project is part of a national consortium program focused on understanding multiple aspects of extracellular RNA. 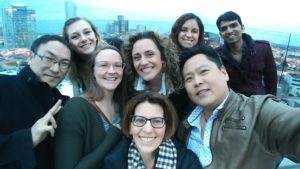