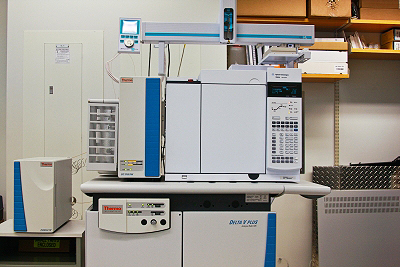 The Mass Spectrometry Research Center and the Mass Spectrometry Core are pleased to announce the availability of a new instrument for high precision isotope ratio measurements by online Gas Chromatography-Combustion-Isotope Ratio MS (GC-C-IRMS). This instrument is made available via a partnership with a local diagnostic screening laboratory.  The Thermo Scientific Delta V plus instrument is able to achieve high precision (+/- 0.0002 Atom Percent) on as little as one nanomole of small organic molecules, such fatty acids, sterols and amino acids after separation by gas chromatography.  This instrument is useful for metabolic flux analysis of lipids, sterols and proteins. Attached is a review article that describes the principle of operation and some useful examples.

If you anticipate having a need to do metabolic tracer studies with carbon-13 or nitrogen-15 and feel the GC-C-IRMS would be helpful to you, please contact me and I can provide further information on the instrument and advice on designing tracer studies. 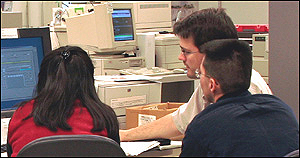 Each TSQ Quantum is equipped with an ESI source and has a ThermoFinnigan Surveyor LC and autosampler attached to it. An atmospheric pressure chemical ionization (APCI) source is also available.

These instruments have consistently shown about 10 – 100-fold better sensitivity than the TSQ 7000, with detection limits of about 5 – 10 fg (10 – 20 attomole) of loperamide, a drug used as a lab reference standard. One of the instruments has an in-line UV detector for investigators who need this capability.

The MSC has three TSQ 7000 instruments available for users that were installed in 1996 and 1997. Each is equipped with an electrospray ion source. Atmospheric pressure chemical ionization (APCI) and nanospray ion (nESI) sources are available on a shared basis.

Two of the TSQ instruments have dedicated Waters 2690 Alliance LC systems equipped with a quaternary pump and autosampler. The third instrument is a walk-up instrument for analysis of organic synthesis products by direct liquid injection.

The ICIS data file format can be converted off-line to the Xcalibur data format used with the newer TSQ Quantum, Voyager GC/MS and LCQ ion trap instruments (see below). This will allow users to take advantage of the better data extraction and report generation afforded by the Xcalibur software. 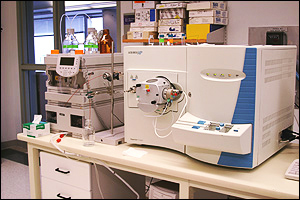 This instrument was moved from the Proteomics Core in 2004 as they acquired new high sensitivity linear ion trap instruments for analysis of peptides by capillary LC/MS.

This instrument is equipped with the standard ESI ion sources and has a custom nanospray ion source that can also be used for capillary LC work.

The LCQ has an Agilent 1100 series HPLC for capillary LC analysis of biomolecules and has an in-line UV detector.

This instrument is a fully automated, general-purpose GC/MS instrument equipped with a multi-function EI/PCI/NCI ion source. The capillary GC is equipped with an HP7673 autosampler and a dual split/splitless injection system. The HP mass spectrometer is used for routine NCI GC/MS analysis of prostaglandins, oxidized lipids, pharmaceuticals and other small molecules. 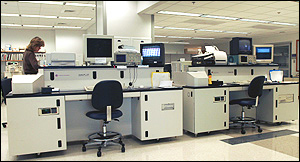 This is a high performance MALDI-TOF instrument for analysis of proteins, peptides and oligonucleotides by matrix-assisted laser desorption ionization using a 337 nm nitrogen laser. This instrument has a 25 kV ion source with delayed extraction (DE) coupled to 2.0 m linear flight tube, with a 3.0 m effective length in reflector mode and is capable of achieving a resolution > 5,000 (FWHM).

Samples can be loaded on 100 position sample targets for rapid acquisition of multiple samples by the data system. The sensitivity is 50 femtomoles of neurotensin. This instrument is routinely used for determination of protein molecular weights by MALDI and protein identification by peptide mass fingerprinting, but structural information also can be obtained by post-source decay analysis of fragment ions produced at higher laser energy.

This mass spectrometer has better sensitivity and resolution than the other MALDI-TOF instruments. The detector was recently upgraded with an improved high current detector with a faster response time and greater sensitivity for high mass ions (m/z >200,000).

The improved electronics, ion detector and tilted ion reflector design result in a 4-fold improvement in resolution and wider dynamic range for detection of trace components in biological matrices. The software in this instrument has been modified for imaging MS applications.

In addition to the mass spectrometers, the MS Core has a Hewlett-Packard 1090 LC that is used for normal phase LC analysis of lipids by silver ion coordination-ion spray MS.

The Core also has an Agilent Series 1100 HPLC system with a binary pump and variable wavelength UV detector that can be used for off-line methods development and analysis of routine samples not requiring MS. A second Agilent, Inc. Series 1100 variable wavelength UV detector is available that can be used in series with the mass spectrometer and the UV signal acquired and stored with MS data via the ICIS data system software.

A ThermoSavant sample concentrator is also available for sample processing.

Vanderbilt University researchers have achieved the first “image fusion” of mass spectrometry and microscopy — a technical tour de force that could, among other things, dramatically improve the diagnosis and treatment of cancer.