The Merrikh lab is focused on two topics: replication-transcription conflicts and blocking the evolution of drug resistance.

Bacteria (and most other organisms) have a common requirement for accurate, timely, and faithful DNA replication. Yet a wide variety natural impediments are known to 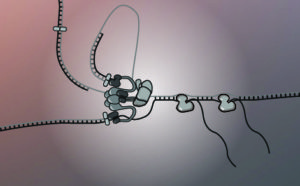 Replication-transcription conflicts are especially harmful when the two machineries meet head-on. This occurs when RNA polymerases transcribe genes on the lagging strand. Presumably to avoid these 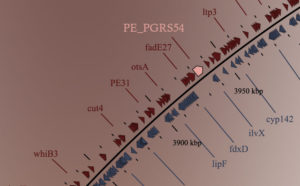 encounters, bacteria have developed highly co-oriented genomes. While this greatly reduces the frequency of head-on conflicts, many lagging strand genes remain in every bacterial species. Our previous work (matching the work of other labs) shows that transcription dramatically increases the mutation rate of co-directional genes. In head-on genes, this increase is doubled. Consistent with their higher mutation rate, we also found that head-on genes evolve at an accelerated rate. In other words, our work shows that cells can customize mutation rates in a gene-specific (based on their orientation) and temporally controlled (based on transcriptional activation/repression) manner. As such, gene orientation and replication-transcription conflicts represent fundamental aspects of genomic architecture.

Though head-on conflicts are extremely harmful to the replication fork, our latest work shows that over evolutionary time scales new head-on genes are continually being created in every bacterial species we examined. This incredible finding suggests that head-on conflicts may actually be desirable for many genes — in particular, genes that need to evolve quickly. Our functional analyses show that genes with similar functions are enriched in the head-on orientation in species that diverged more than a billion years ago. These include virulence and antibiotic resistance functions. We are actively investigating these and other exciting findings at the intersection between repliction-transcription conflicts and the evolution of genomic architectures.

Antimicrobial resistance is a global health crisis. To resolve this problem, many researchers are developing new antibiotics. But history has already proven that, by itself, this is a losing strategy: bacteria will eventually evolve resistance to new drugs regardless of their potency or mechanism. What the world needs is a completely new strategy to solve this problem. 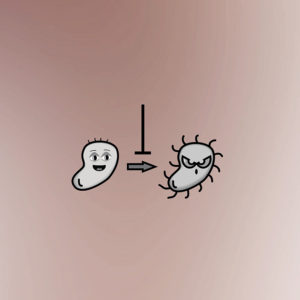 Over the years, we have found that bacteria use active mechanisms to increase mutation rates and accelerate evolution with high precision. For example, we showed that replication-transcription conflicts increase mutagenesis of head-on genes, accelerating evolution gene-specifically, only when the function of that gene is required (only when the gene is transcribed). We have characterized some of the proteins that function to increase mutation rates actively, which we refer to as “evolvability factors”. We have shown that when these evolvability factors are knocked out, cells can no longer adapt to environmental stresses, including antibiotics. Part of our lab continues to identify evolvability factors and is identifying compounds that inhibit their function. Our long-term goal is to discover “anti-evolution” drugs that can be used together with antibiotics during treatment of patients to prevent antibiotic resistance development. This strategy has not been tested in the clinic but could be a game-changer for the problem of antimicrobial resistance.