Our lab is interested in the signaling mechanisms that regulate brain development and cancer. Specifically, in addition to studying the role of Shh signaling in the genesis of the functional adult brain, we also investigate how aberrations in Shh signaling drive the formation and maintenance of cancer. Our research is made possible through the use of cutting edge techniques and multidisciplinary approaches. Some of our techniques include targeted genetic manipulation, live cell imaging, gene expression profiling, the orthotopic grafting of tumor cells, and state-of-the-art localized stereotaxic injection for in vivo gene delivery and manipulation.

The functional neural circuit of the adult brain, including that of the cerebellar system, is comprised of a defined number of inhibitory and excitatory neurons. Developmental studies indicate that these functionally distinct neurons are generated during early development from spatially separate mitotic progenitors that transiently expand in response to extrinsic signals. Imbalance of excitation and inhibition as a result of alterations in these early developmental events has been implicated in several debilitating neurodevelopmental disorders — including ataxia and autism spectrum disorder, where cerebellar dysfunctions have been widely noted. Previously, we discovered a novel mechanism for the delivery of the signaling molecule Shh, whereby Shh utilizes the cerebrospinal fluid as a vehicle for the expansion of cerebellar progenitors. This establishes the choroid plexus as a novel site of growth factor secretion for neural development. More recently, our research has revealed that Shh derived from Purkinje neurons control the development of both excitatory and inhibitory neurons during early postnatal stages, highlighting the central role that Purkinje neurons play in regulating the co-production of these functionally distinct neurons. Our current work represents a continuation of these findings; we hope our research will continue to offer insight into human motor learning disorders such as ataxia and autism spectrum disorder. 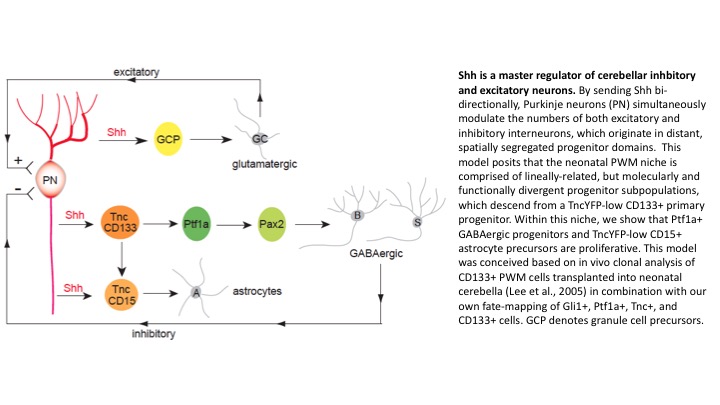 Sensorimotor learning can be broadly defined as the acquisition of novel action or movement through extraction and processing of sensory information, leading to relatively sustained changes in the capabilities for skilled behavior. This form of learning critically depends on the cerebellum.

Eye-blink conditioning is perhaps the best studied paradigm for examining the neural basis of sensorimotor learning in mammals. Abnormal eye-blink conditioning has been associated with neurodevelopmental disorders such as autism spectrum disorder; in autism spectrum disorder, the cerebellum reveals the most consistently observed structural brain abnormality.

We have recently developed an eye-blink conditioning system (see picture below) to evaluate genetically modified mice, and are currently seeking to elucidate the role of cerebellar interneuron subtypes and Hedgehog signaling in sensorimotor learning. This system involves the repeated pairing of a conditioned stimulus (LED light or tone) to a blink-eliciting unconditioned stimulus (air puff) while the mouse’s head is fixed and body is freely moving about on a cylindrical platform. 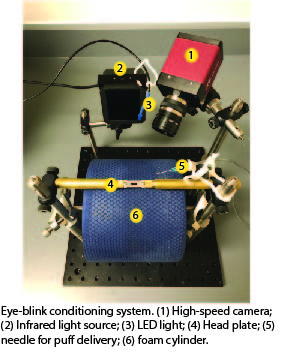 Medulloblastomas are the most common pediatric malignant brain tumor originating from the cerebellum. Treatments for these highly aggressive tumors often result in cognitive and neuroendocrine deficits as well as tumor recurrence. Medulloblastomas are heterogeneous tumors that can be subdivided into four clinically and molecularly distinct subgroups. The Sonic Hedgehog (SHH) subgroup represents about 30% of all medulloblastomas in humans. Current therapeutic targets for SHH pathway-driven tumors are limited to inhibition of the SHH pathway activator, Smoothened (SMO). However, it is becoming apparent that cancer cells are frequently refractory to SMO inhibition through either the acquisition of secondary mutations or activation of SHH signaling downstream of SMO. Our laboratory is interested in identifying potential therapeutic target proteins of medulloblastoma. 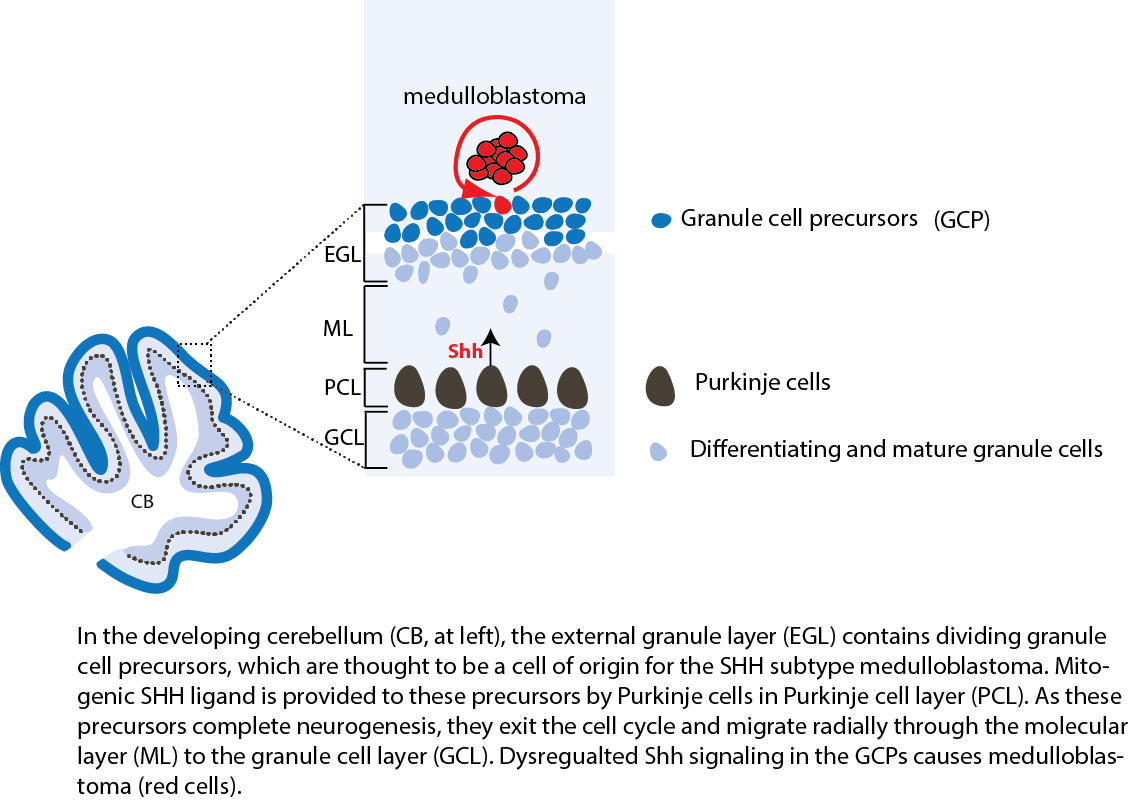