We study how LINC complexes transmit force across the nuclear envelope to position the nucleus and regulate gene expression. 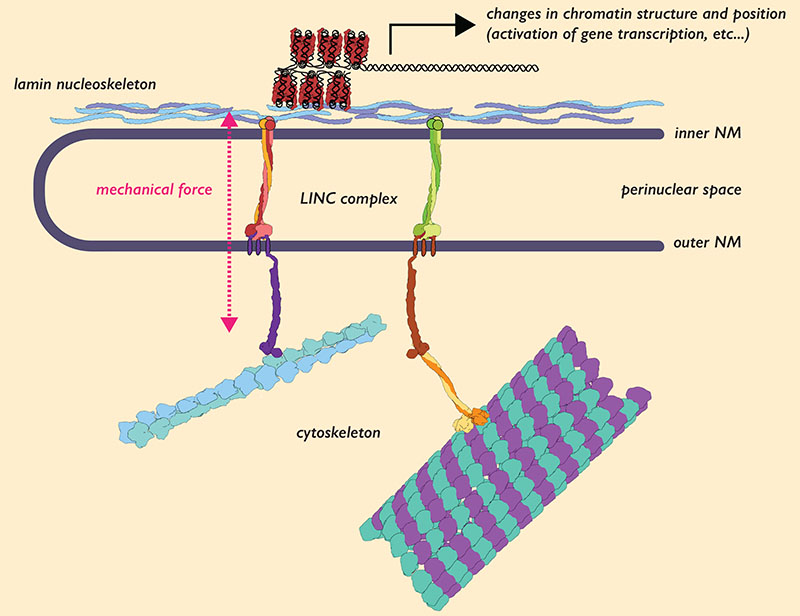 During the course of a cell’s life, the nucleus constantly moves; it is repositioned in motile cells and during differentiation. Moreover, mechanical signals originating outside the cell are carried to the nucleus to regulate gene transcription in a process known as mechanotransduction. Mutations in genes associated with proper nuclear positioning and mechanotransduction trigger apoptosis and lead to human disease, including lisencephaly, cardiomyopathies, and muscular dystrophies. Years of cell biological and, more recently, structural and biochemical studies provide clear evidence that cell adhesion molecules (CAMs) at the plasma membrane carry mechanical signals from outside the cell to the underlying cytoskeleton surrounding the nucleus. These signals are transmitted across the nuclear envelope (NE) to the nucleoskeleton within the nucleus. How CAMs and the cytoskeleton sense and transmit mechanical force has been well studied in vivo and in vitro but relatively little mechanistic detail is known about the nuclear components involved in this network. Recent studies show that protein complexes, which span the nuclear envelope, directly connect the cytoskeleton to the nucleoskeleton and likely serve as force-transducing modules for nuclear positioning and mechanotransduction, though the molecular mechanisms underlying nuclear force sensing are not well understood.

The Olivares laboratory is interested in studying how these LINC (linker of nucleoskeleton and cytoskeleton) complexes transmit force across the nuclear envelope to position the nucleus and regulate gene expression. Our lab uses single-molecule force spectroscopy in addition to solution biochemical methods to probe how LINC complexes assemble, respond to mechanical force and interact with their cytoskeletal and nucleoskeletal binding partners.