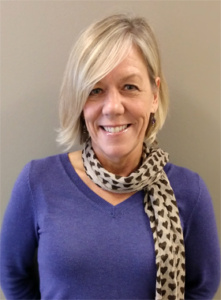 Kristen earned her Ph.D. in Organic Chemistry from the University of Colorado, Boulder under the direction of Professor Tad H. Koch. In the Koch lab, her research utilized nucleoprotein photo-crosslinking to study RNA-protein interactions.

After Boulder, Kristen served as an Assistant Professor of Chemistry at Angelo State University, Texas for two years before returning to her alma mater Cal Poly, San Luis Obispo in the fall of 2000. After nine years as a lecturer, she joined the Cal Poly faculty as a tenure track professor, and was recently promoted to Associate Professor.

Kristen has joined the Lindsley lab as part of yearlong sabbatical from Cal Poly, and when not making new molecules, she enjoys writing music and fronting her rock-n-roll band The Kristen Black Band.