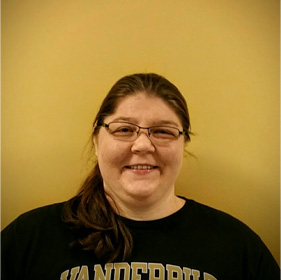 Kayla J. Temple earned her B.S. degree in Chemistry at Wheeling Jesuit University in 2007 and went on to earn her Ph.D in Medicinal Chemistry & Molecular Pharmacology at Purdue University in 2013. Kayla obtained her doctoral training under the tutelage of the late Prof. Richard A. Gibbs. The overall goal of her doctoral work was to investigate various prenylated proteins’ roles in the various stages of cancer. Her work focused on the synthesis of unique non-natural isoprenoid analogs of farnesyl- and geranylgeranyl diphosphates, with an emphasis on designing and synthesizing novel chemical tools to be used as proteomic probes.

Kayla moved to Vanderbilt in 2014 to pursue her post-doctoral training in the Lindsley Laboratory. Over the next two years, Kayla worked on several projects for which she has published several papers and patents. Her post-doctoral research was focused on the design and synthesis of G protein-coupled receptor (GPCRs) modulators such as protease activated receptor 4 (PAR4), the Gβγ-SNARE (N-ethylmaleimide-sensitive factor attachment protein receptor) complex, Muscarinic acetylcholine receptor M4, and Dopamine receptor D4 as well as of the tyrosine kinase Discoidin domain receptor 1 (DDR1) kinase.