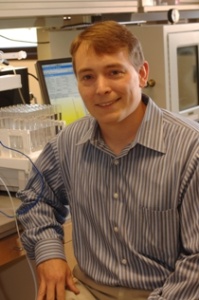 Craig Lindsley received his Ph.D. degree in chemistry in 1996 from the University of California, Santa Barbara, in the Lipshutz laboratory developing novel bi-directional organometallic linchpins for all-E polyene synthesis. Then as an ICCB (Institute of Chemistry and Cell Biology) postdoctoral fellow in the labs of Prof. Matt Shair at Harvard University, he developed a solid phase biomimetic synthesis of carpanone-like molecules.

After brief stints at Parke-Davis and Eli Lilly, Dr. Lindsley joined the Medicinal Chemistry Department at Merck and Company in West Point, PA. Merck where he established and led the Technology Enabled Synthesis (TES) group as a senior research fellow/group leader.

In 2006, Dr. Lindsley joined the faculty of the Vanderbilt University to direct the medicinal chemistry efforts of the Vanderbilt Center for Neuroscience Drug Discovery, with a primary mission of facilitating translation of recent advances in basic science to novel therapeutics. Dr. Lindsley is Associate Editor of Current Topics in Medicinal Chemistry and serves on the editorial boards of two other international journals. He serves on the Scientific Advisory Board of the NIH National Chemical Genomics Center, and is a worldwide medicinal chemistry consultant for Amgen. Dr. Lindsley’s current research is focused on development of novel treatment strategies for schizophrenia, Parkinson’s disease, and other brain disorders.