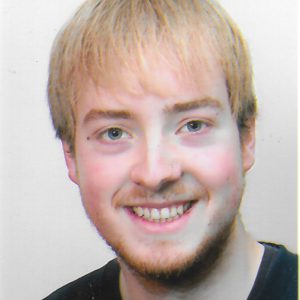 Jonas was a DAAD RISE worldwide scholar, working in the lab from July to December 2015. Jonas is an undergraduate student at the University of Applied Sciences Emden-Leer, Emden, Germany, majoring in Biotechnology and Bioinformatics.

Jonas generated and characterized arrestin-3 mutants with modified receptor specificity. The new series of mutants were generated based on the crystal structure of the arrestin-1-rhodopsin complex, the first arrestin-GPCR structure determined, to which our lab contributed (Crystal structure of rhodopsin bound to arrestin determined by femtosecond X-ray laser. Nature 523 (7562), 561-567; doi: 10.1038/nature14656 (2015)). The data on these mutants will be included into a future publication.

Another part of Jonas’ work was to test several mutants in the finger loop of arrestin-3, which is likely engaged by the receptors. Based on the high-resolution structure of arrestin-3 activated by IP6 solved by Qiuyan Chen (currently in review in Cell), graduate student Nicki Perry generated several mutants and tested their interaction with the muscarinic M2 receptor in cells. She found profound effects of some of these mutations on the arrestin-receptor interactions. Jonas tested the ability of these mutants to bind dopamine D2 receptor. He found that some of the mutations similarly affected the binding to both M2 and D2 receptors, whereas the effects of others turned out to be receptor-specific. These data were included into the manuscript above, where Jonas is on the author list.

Publication from the lab

Zheng, C., Tholen, J. Gurevich, V.V. Critical role of the finger loop in arrestin binding to the receptors. PLoS One, in press (2019).