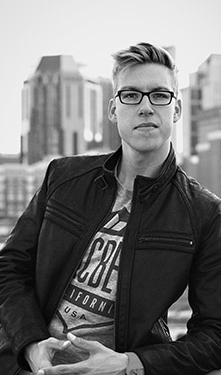 Georg worked in the lab from July to October of 2014 as a research intern. He is a master student in Biochemistry and Molecular Biomedicine at the Technical University of Graz, expected to graduate in 2015.

His work focused on elucidating the molecular mechanism of the smallest MAPK scaffold recently discovered in the lab, arrestin-3-derived T1A peptide. Georg is studying the interactions of this peptide with kinases JNK1/2/3 as well as their upstream kinases MKK 4/7 and ASK1.

Arrestins are proteins that regulate cell signaling and are best known to specifically bind phosphorylated activated G protein-coupled receptors (GPCRs) to either terminate G protein-mediated signaling or to initiate G protein-independent signaling. Among other proteins, arrestins bind MAP kinases. It has been shown that arrestin-3 is capable of facilitating JNK activation as a true scaffold protein by tethering kinase components and bringing them close together. Interestingly, Dr. Xuanzhi Zahn in the lab discovered that T1A, a 25 amino acid peptide from arrestin-3, not only binds each kinase in the ASK1-MKK4/7-JNK3 signaling module in vitro, but also facilitates the activation of JNK3 in cells.

Utilizing both in vitro as well as in-cell assays, Georg tries to understand the mechanism of T1A action and it’s implications in the JNK activation. So far he assessed the binding of T1A to JNK1/2/3 using purified proteins. The results demonstrate that T1A directly interacts with JNK1, JNK2 and JNK3. Moreover, Georg found that T1A shows distinct binding affinities to different JNK isoforms. Based on his findings, T1A exhibits the strongest binding to JNK3 and the weakest binding to JNK1, which correlates to the binding characteristics of arrestin-3. Surprisingly, T1A binds JNK2 better than full-length arrestin-3.

Why do we care?