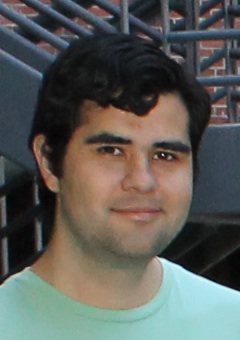 Alejandro is a medical student interested in research. He came to the lab through EMPHASIS program. He worked several hours per week during semester, and worked full-time through the summer. Alex was elucidating which parts of arrestin are involved in binding which non-receptor partners. Under supervision of Xuanzhi Zhan, Alex constructed E. coli expression plasmids encoding MBP fusions of parts of arrestin-3 that are likely involved in recruitment of various non-GPCR signaling proteins. Considering how little time Alex had, he made a lot of progress. He made more than ten constructs, expressed and purified all these fusions, and tested their binding to JNK3, comparing it to pure MBP (negative control) and MBP-arrestin-3 (positive control). He identified several parts of arrestin-3 that bind JNK3, and now is making additional fusions both to narrow down the binding element in the N-domain and to combine those in the C-domain that show weak binding in order to capture complete site. The paper describing this work is currently in review.

Moreover, via similar pull-down assays the fusions Alex made will be used to identify binding sites of other MAP kinases, ubiquitin ligases, etc. Alex and Xuanzhi will continue this work.

Publications from the lab: