Recent research has showed that effective human augmentation does not necessitate a powered exoskeleton built to do mechanical work. This has been experimentally demonstrated in zero output work tasks such as walking (Collins, et. al. Nature, 2015), and has been theoretically shown in nonzero output work tasks such as running (Sutrisno & Braun, Science Advances, 2020) and jumping (Sutrisno & Braun, IEEE TNSRE, 2019).

The surprising finding of the latter two works was to show that an exoskeleton which augments the leg with a variable stiffness spring, could enable a human to move faster, and jump higher without supplying energy beyond the energy supplied by the human. This finding suggest that variable stiffness spring actuators provide the core technology for human augmentation.

We investigate novel ways to use variable stiffness springs to augment human motion.

The figure shows an example of a running exoskeleton that uses a variable stiffness spring to enable the human to run 50% faster. The human may supply energy by compressing the spring during flight. The spring later increases its stiffness to support the body weight and accelerate horizontal motion when pushing against the ground. 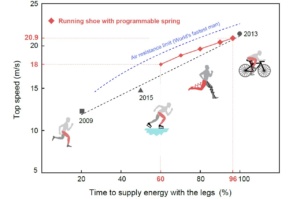 A. Sutrisno and D.J. Braun, How to Run 50% Faster without External Energy, Science Advances, 2020.

Energetically-passive robot exoskeletons, mimicking the function of the bicycle, could enable humans to reach previously unprecedented mobility. However, energetically passive robot exoskeletons require a sophisticated mechanism to enable the human to supply energy. In this work, we present a new type of human-driven compliant transmission mechanism that could enable humans to supply energy when the leg is in the air, store the supplied energy, and release the stored energy when the leg is on the ground, in order to amplify the leg force and power.

The energy required by a robot to augment the natural capability of a human limb is the energy required to do mechanical work, and the energy required to support the body. Although the latter task does not result in any increase in kinetic energy, experimental studies have shown it to be metabolically expensive to the muscles. Based on this observation, effective human augmentation could be achieved by Variable Stiffness Springs operated in parallel to human joints to support body weight, even if such springs only supplements joint stiffness without doing mechanical work, Braun et al IEEE TRO 2019.