Our paper on Quasi-passive Exoskeletons is accepted in IEEE TNSRE

Have you ever wanted to jump as high as a housecat? Effortless moving from the ground to the top of a table, which is more than double its own body height. Recently, researchers in the ARCLab proposed this can be done, without batteries, if we used the right kind of springs. (A. Sutrisno and D.J. Braun, Enhancing Mobility with Quasi-passive Variable Stiffness Exoskeletons, IEEE Transactions on Neural Systems & Rehabilitation Engineering, vol. 27, 2019)

If we could only use springs to collect the energy of multiple jumps, and release it into one large jump, then a human could theoretically jump as high as 3 meters after 6 seconds, and 5 jumps: 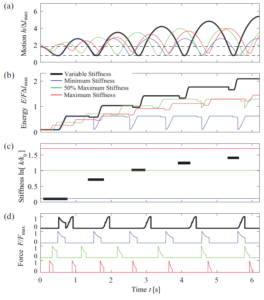 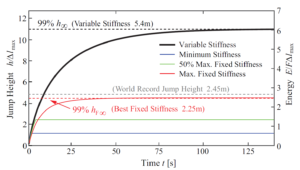 This exoskeleton in theory uses no external power, i.e batteries. To jump, it only uses energy that is provided by the user’s legs from multiple jumps. However, in order to do that, the spring must be able to do 2 things:

The 1st requirement of changing spring stiffness is necessary such that in the jumps preceding the final jump, the spring is able to save all energy after the human contacts the ground, instead of losing it in a collision when landing. Therefore, the exoskeleton requires a special spring, i.e “Variable Stiffness Spring” that is capable of changing its stiffness over time.

Because the device supplies no energy to the motion, only changing spring stiffness, which costs negligible amounts of energy compared to a single jump , the entire device could in theory be 100% human powered, with some jump energy going into changing the spring stiffness. This allows the device to not require batteries, which would decrease the weight of such exoskeleton.

Imagine if people could buy special shoes to jump 3 meters high, that had greater battery life(infinite, as long as you don’t get tired from jumping) than most rent by the hour scooters. A firefighter would find it easier to climb into windows, instead of spending time to setup a heavy ladder. A trapped firefighters indoors could accumulate energy, then direct it forwards to jump across large gaps where the floor has collapsed. Imagine how the rules of Basketball may have to change if every athlete could jump as high as the hoop and perform a slam dunk. Would Basketball be open to less tall players, and therefore be more accessible to everyone resulting in a larger talent pool? Or would we have to create a new sport entirely separate from Basketball, maybe called “Zero G Basketball” as jumping shoes almost act like a complete counter to gravity. One thing is for sure, it may be easier for humans to catch up with cats and be able to rescue them from trees faster.

These questions are currently answered as a prototype is underway, and is highly dependent on the advancement of variable stiffness spring technology. However, recent progress has been promising, and we expect a prototype to be finished in the next couple years.